Human rights are universal – and women are humans. This simple yet sometimes undermined statement is very topical in the context of protests and a heated debate in today’s Poland. Should Poland liberalise its restrictive laws concerning abortion? Or should it come back to the “abortion comprimise” with the Church? The internal dispute is on.

What is currently going on in Poland?

Since 22.10.20, Poland experiences the largest protests in years despite the global pandemic, due to the recent decision made by the Polish Contitutional Court on abortion restrictions. In fact, Poland has one of the strictest abortion conditions in the European Union. The Polish Constitutional Court has recently voted down the article 4a(1)(2) of the The Family Planning, Human Embryo Protection and Conditions of Permissibility of Abortion Act, as unconstitutional. This ruling remains controversial since the Polish government has been accused of “appointing its own judges” (see: Constitutional Crisis 2015), thus the Constitutional Court is highly politicized by the ruling party. If we think about the cultivated rule of law – the behaviour of the Polish government clearly goes against this basic principle. This is also why the judgement made by the Constitutional Court met with societal opposition on an enormous scale. On one hand, those who protested since 2015 with the Committee for the Defence of Democracy (pol. Komitet Obrony Demokracji), are now rancorous – because the very “being” of the Constitutional Court in its politicized form undermines the above mentioned rule, on the other – the judgement is seen as “dictated by conservative values that do not fall in line with liberalising societal changes in Poland”. These two forces – the undermined rule of law and the general societal dissatisfaction with Prawo i Sprawiedliwość are conjoined together.

An important factor influencing the Polish government’s decision is the high involvement of the Church in Poland’s politics. In fact, this had already been the case before 2015, when Prawo i Sprawiedliwość won the majority in both parliamentary and presidential elections. Historically speaking, Christianity is a significant part of Polish culture. However, because of today’s emphasis on Western liberal values, a large part of the population is further transitioning to secular ideals. This creates an important ideological divergence that separates Poles on the matter, and was directly reflected in 2020 presidential election results. The extensive scale of today’s protests demonstrate an occurring change of mind within the society. Accordingly, many pictures on social media portray the submerged Polish cities, with crowds in the times of a global pandemic, but also the counterattacks from enraged militants. In total, although the number of participants vary daily, up to 400.000 protesters have been recorded worldwide (e.g. United Kingdom, Germany and many more countries) on 28.10.20, and among them, more than 100.000 in Warsaw only (estimations of the organisers vary from the estimations from the police). 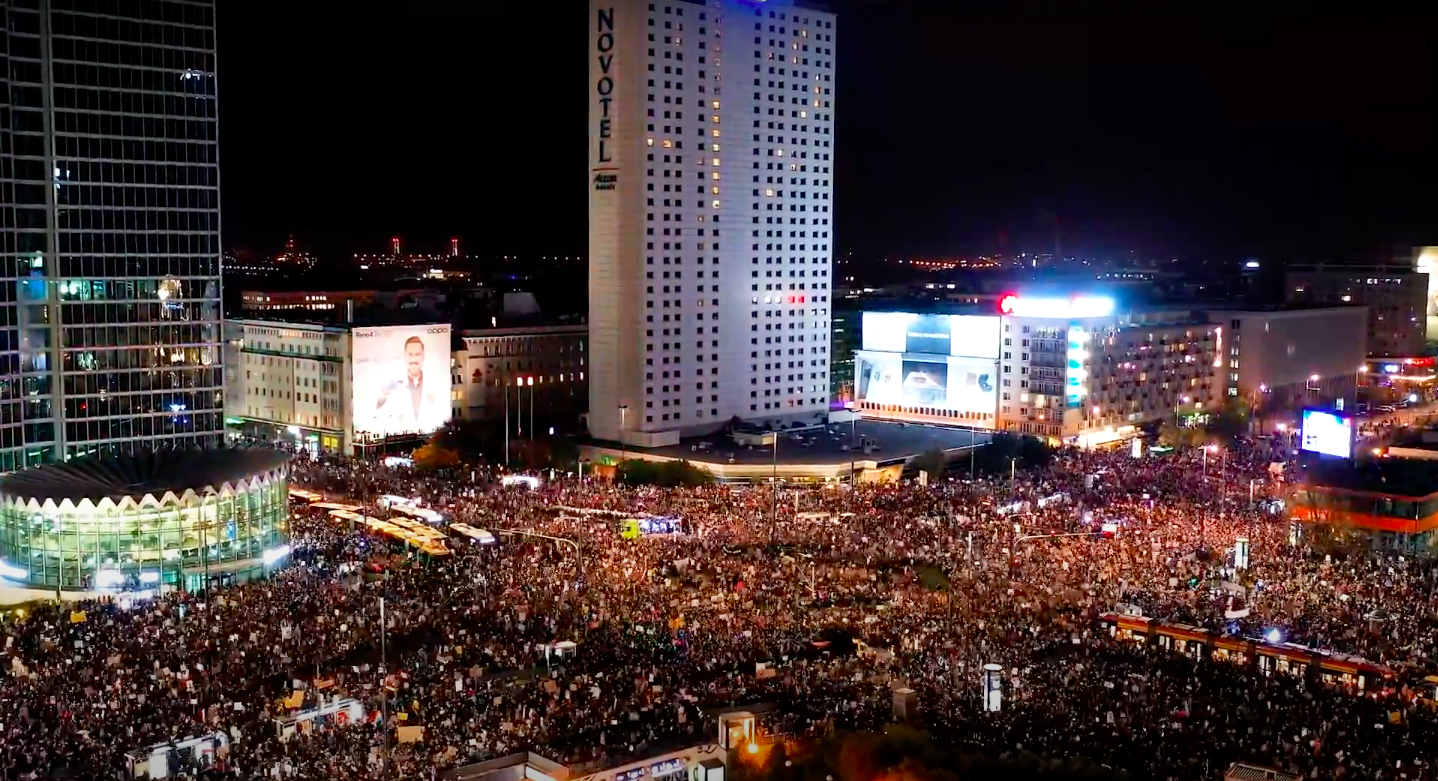 Prawo i Sprawiedliwość certainly did not expect the intensity of protetsts as previous pro-abortion protests did not reach a similar scale. This phenomenon not only takes place in bigger cities such as Warsaw, Cracow or Poznań, but is also highly noticeable in rural areas. Because the protests have been lasting for nearly two weeks and increase in number and intensity, the Polish government aims to find a political strategy to silence crowds. Accordingly, Prawo i Sprawiedliwość is currently discussing the imposition of a state of emergency and total lockdown for the corona crisis. By imposing mandatory quarantines, the government would aim to obtain a better control over the formation of protester groups and riots. Of course, this questions the Polish government’s true intentions on their citizens’ health in the age of Covid-19 virus. Dropping abortion and other sensitive matters speculations during the global pandemic would have been beneficial for hindering the spead of coronavirus. However, because the government decided otherwise, the opposition claimed that it will keep protesting for its rights as long as Prawo i Sprawiedliwość leaves the government position or reproductive rights are further liberalised. The emotions in public debate are rising on both sides of the political spectrum.

An interesting point can be made when analysing the change in language in the public debate in Poland, throughout the years. Ogólnopolski Strajk Kobiet’s organisers (eng. All Poland’s Women’s Strike), have changed the way they profess their opinion on women’s rights. This feminist movement dates back to 2016, when repruductive rights in Poland were at risk due to the proposed legislation that would have tightened the ruling abortion law. Back then, the All Poland’s Women’s Strike’s message was simple and straightforward – “We want the freedom of choice” (over our own bodies) – and that was often recurring in both protests and supportive media. Such slogans were also prevailed:

Since then, what can be observed, is a veritable shift to more “earthy”, “immodest” language, both in pictures/ drawings and slogans repeated. Pictures of blood, vaginas and unsuccessful abortions are visible in October 2020’s protests. With this provocative behavior, Poles hope to shock and reach a greater recognition in the country, but also globally. What is more, the catchphrases have changed as well – from simple “pro-choice” slogans, they transitioned to the following watchwords. To name a few :

“Kościele, won od mojej macicy! – (eng. Church, get away from my uterus!)“

What is even more striking and prevalent, is the main word, chanted by hundreds of thousands of protestors:

The expression of huge dissatisfaction of Polish women and men, is not only connected to further abortion restrictions, but also to Prawo i Sprawiedliwość, a party often becalled “Law and Justice, with no law nor justice”. This is why, the future of Ogólnopolski Strajk Kobiet (OSK) movement is quite uncertain – its opponents say it “does not reflect the opinion of the masses” (nota bene, more than 200.000 people in Warsaw alone on 30.10.20 contradicts this statement) and will lose its power soon, and the proponents say the OSK “will lead to an another revolution”, eventually to an overthrow of the government.

What is also a contributing factor to the general discontent with the Polish government, is the economic recession due to Coronavirus, growing inefficiency of the public health sector and, what is essential for many, the constitutional crisis which dates back to 2015 (see: sources). That is why, many different social and economic groups protest, and are likely to join the protests – these are the polish entrepreneurs, the intelligentsia, Generation Z and the farmers. The future of the massive protests in Poland is unknown, and the importance of looking into the internal affairs in this country is constantly growing. 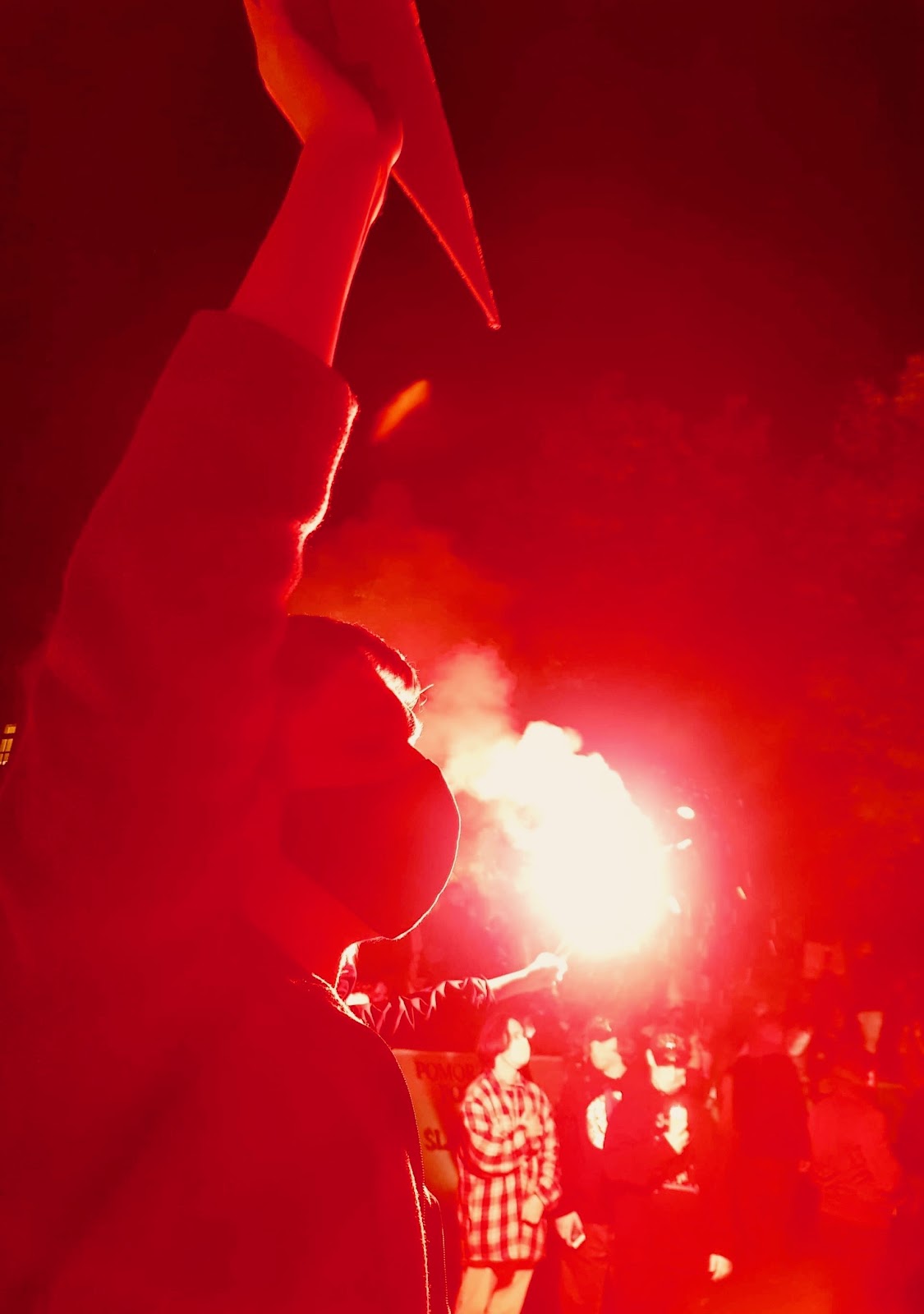 Media manipulation – the cannibals, the SS and the Devil

Another interesting aspect of the ongoing affairs is the language used by Polish state media corporation – TVP. It is an open secret that it chooses sides in the ongoing, internal conflict, and that, according to the Media Ethics Council it “turned into an instrument of propaganda” of the ruling party – PiS, especially since 2015 parliamentary and presidential elections in Poland. TVP has reached a point in which, among Poles, it either raises a laugh, anger, embarrassment or deepest devotion. The critics often refer to the fact that the quality of the media coverage has been lowering since the 1990s, but only after the 2015 elections the programmes broadcasted became “vulgar, strictly political and biased”. It is especially seen in relation to the fact that the state media corporation in the Polish People’s Republic had a “cultural mission”, e.g. by broadcasting Teatr Telewizji (eng. Television Theatre programme), and that the money spent on TVP is 2 billion zloties annually.

What is worth noticing here, is the Wiadomości (eng. News) evening programme, produced by the TVP state media corporation. After the 30.10.2020 general strike in Warsaw, the evening Wiadomości has claimed:

As it can be observed, the TVP reaches for dangerous stereotypes, conspiracy theories and pure propaganda by colligating “seemingly” unrelated facts and events. It also appeals to either extremely right wing, often deeply devoted segment of the society, in a populist way. For instance, Jarosław Kaczyński (leader of Prawo i Sprawiedliwość and current vice prime minister) has encouraged the all-polish militants to “guard the Churches against the protestors”. Moreover, on 02.11.20, the Ministry of Education stated that teachers having encouraged students to protest will “face legal implications” within the “frame of law”, and by the “information gained from education welfare officers”. It is unknown, how these “legal implications” will be implemented, and what it means for the common teachers that have joined or encouraged their students to join the protests. The escalation of protests and their legal consequences can lead to escalation of political chaos, brutality and further societal divisions.

It is also important to note that although the general, internal dissatisfaction with Polish politics is not a new phenomenon (Poland is, and will be divided after the ecomic transitions in the 1990s), these are the recent Constitutional Crisis turbulences, and abortion restrictions that has been an ignition spark. As it can be seen, the freedom of expression is limited in Poland nowadays, which undermines its democratic values – what will come next? What will the Law and Justice do with the fire? So one can only imagine.

(The ongoing protests and emotions at rise)

Lower right: “I’m so pissed off I made a transparent”)

(Warsaw and the outstanding intensity of protests)

(“PiS left the game. Kaczyński was an Impostor”) 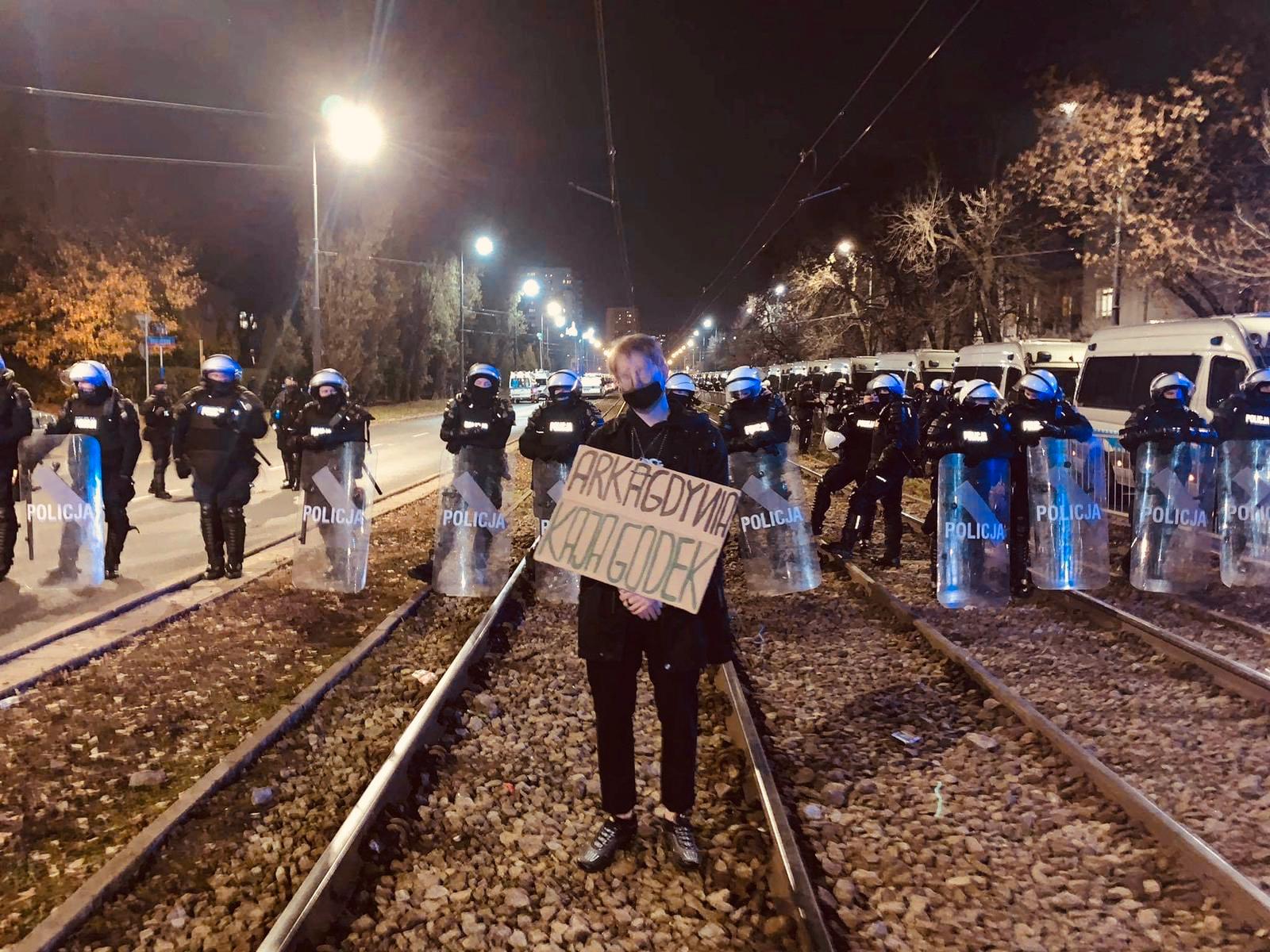 (“PolEND” with Kaczyński represented as a dictator)

http://monitorkonstytucyjny.eu/wp-content/uploads/2018/07/Matczak_Polands-Constitutional-Crisis-Facts-and-interpretations_0.pdf (eng. on the 2015 Constitutional Crisis)

https://tvn24.pl/polska/men-grozi-konsekwencjami-nauczycielom-za-udzial-w-protestach-lub-namawianie-uczniow-4740310?fbclid=IwAR1q-GIxx2mponC-3IuvYN93f32QAwPNjjqH1X431p0l5aWbg_jzPZ5kvCk (pol. on Ministry of Education)

https://www.youtube.com/watch?v=KvhRPlwxxss&has_verified=1 (right-wing militants on the streets of Warsaw)

2020-11-03
Previous Post: Kyrgyzstan’s Puzzle: A Deep Dive into a Flawed Democracy
Next Post: Playing chess with the Grim Reaper