The Elegant Words of Devendra Banhart

By: Sphaera
In: Arts and Culture
Tagged: artist, music 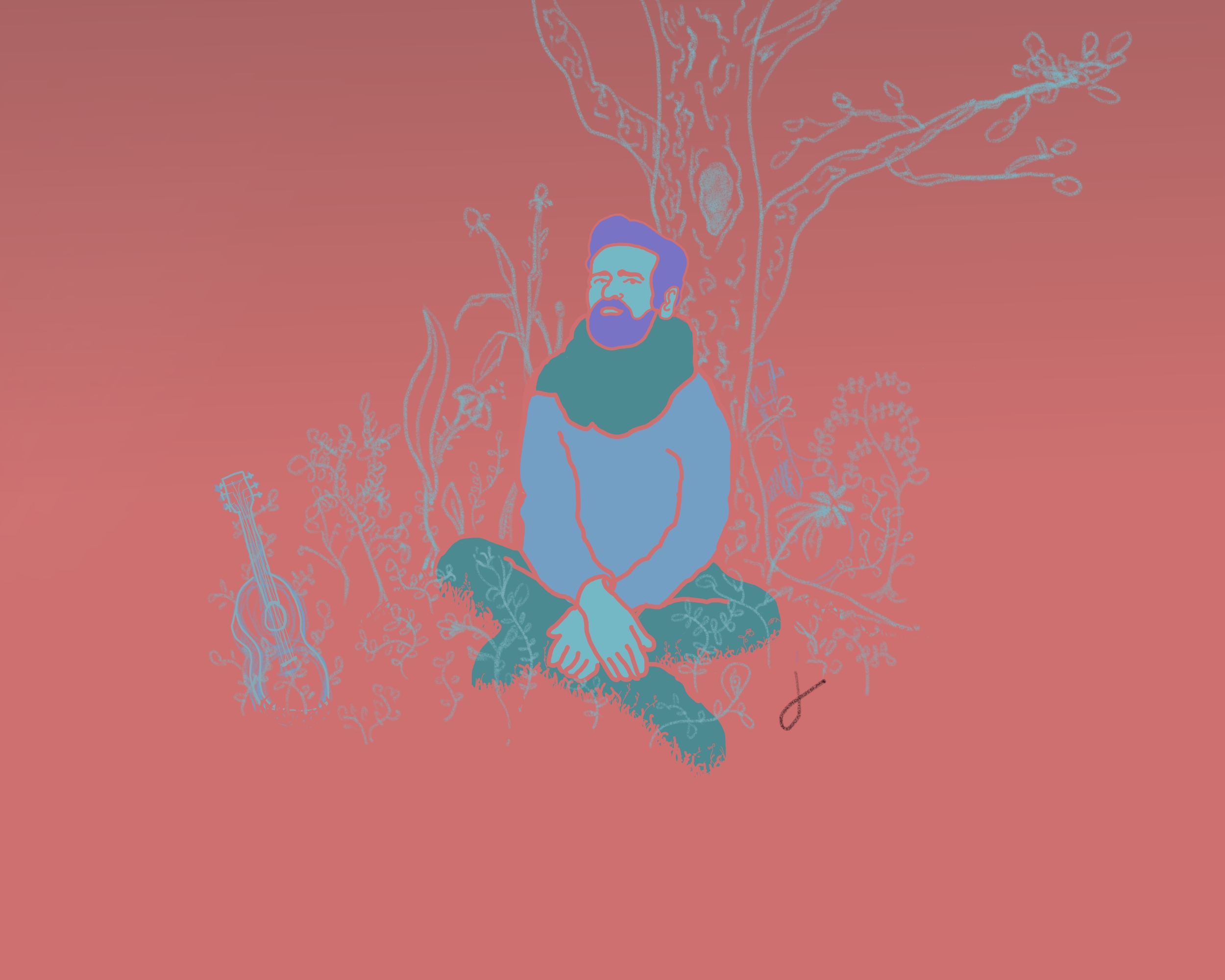 Where mastery of stage performance and poetic subtleness cross, you find Devendra Banhart. The Venezuelan-American songwriter, poet and visual artist has been a prominent name in the alternative music scene for nearly two decades now. Or maybe used to be is the more accurate manner of phrasing it. Due to a number of underwhelming records, his popularity started to decrease over the last ten years. With a new, intriguing record, Ma, his reputation might be restored again. Once a mysterious, long-haired hipster mixing folk and avant-garde music, he is much more mature in both his appearance and his musical output now. The story of the rise, the fall and the resurrection of an artistic genius.

The breakthrough of Banhart can be traced back to 2004, when he released his third record ‘Rejoicing in the Hands’, where we find classic singer-songwriter music with the simplicity of typical folky instrumentation and lyrics about friendship, love and nature. The comparison to other classic folk musicians like Nick Drake was easy to make, which is in itself a notable parallel, but also one which could blend with cynicism. A book with the width of the bible could be filled with one-hit and one-album wonders in the world of singer-songwriters. Banhart, however, initially escaped this prophecy and released an even higher acclaimed album in 2005 named Cripple Crow. It is an impressive assembly of songs, both numerically (22 songs, 1 hour and 14 minutes) and musically, with tunes surpassing his former albums in music composition, variety and, foremost, being surrealistic. Influences on the album can be found in notably classic Latin instrumentation, 60s rock and roll and folk music with poetic references to the Beatles and his own childhood. Banhart found himself in the golden years of his career and became the face of a whole new music genre: Freak Folk.

This new movement of musicians found large appeal among young people in the United States in the beginning of this millennium. It represented a (small) revival of the hippy movement of the 60s. A new term was soon found for it: New Weird America, a resurrection of ‘Old Weird America’, which entailed the classic protest music of Bob Dylan and Joan Baez. The music both ‘Weird Americas’’ created was socially aware, anti-commercial and often complex to get into. Banhart was the main figure in this loosely bounded group of artists and he stood at the top of the mountain. The only way to go next was down. The relative lack of current interest in the other main figures of the movement is perhaps illustrative of the fate of Freak Folk. What happened to the genre was what often happens to ‘alternative’ art: the elements opposing mainstream art become the new mainstream, the world moves on, the ‘real’ alternativists pop up.

Banhart had to move on as well and produced two poorer albums: Smokey Rolls Down Thunder Canyon and What Will We Be. The elements that made his former albums a success, the variety of genres and the popularity of the niche he moved in, were turning against him. Especially on What Will We Be, which came out in 2009, Banhart seemed uninspired, both musically and lyrically. The wide variation in signing styles, genres, languages and instrumental variations, often within songs, mostly becomes tedious for the listener instead of surprise of inspiration. The music on these albums feels like the performance of an overdone trick. These albums are, however, not without greatness. Carmensita on Smokey Rolls Down Thunder Canyon and Baby and 16th & Valencia Rock Music on What Will We Be gave a hint of the old magic Banhart was able to spread. These albums might indicate a larger problem of being a musician in the 21st century; how do you stay in the public eye when a huge variety of music is just one click away. The balance between choosing your trademark sound and a more experimental approach is a tricky one.

It might be not that much of a surprise that his fans had to wait four years for his new work. A shift of focus seems to have happened in the intermediate period. When Banhart returns in 2013 with his album Mala, he can be seen in fancy clothing, a fresh haircut and a trimmed beard. The album consists of typical Banhart elements, but also feels original and more thoughtful than the preceding ones.

This is best heard in the sixth track of the album, Your Fine Petting Duck. Leave it to Banhart to come up with mysterious titles. It’s a duet with his then girlfriend about a lost relationship, in which she begs her ex to return and with Banhart, impersonating the ex-boyfriend, acknowledging all his indiscretions, singing:

If he ever treats you bad, please remember how much worse I treated you

If he doesn’t try his best, please remember that I never tried at all

And if he makes you cry a lot, please remember that with me you never stopped

Musically, the track transforms mid-song from a soft guitar and bass sound into a keyboard-based disco sound in which the remaining lyrics are sung in German. Banhart reinvented himself and his sound on this record, which easily flowed into his next work, Ape in Pink Marble, which is a much more introverted album. Music critiques are often looking for a certain moment of maturing. The weaker efforts of Banhart can in that sense probably be seen as natural processes in the exploration of his potential. That potential flourishes in his latest album, Ma, released in 2019.

Ma has richer and better mixed instrumentation than most of his earlier works. Banhart’s soft, jazzy voice becomes part of the instrumental soundscape of saxophones, string instruments and synthesizers, instead of being an isolated compartment. The inspirations can as always be found all over the world; the resemblance to Leonard Cohen’s One of us Cannot Be Wrong which can easily be heard on the song Memorial and the singing in an impressive four languages (English, Japanese, Spanish and Portuguese) are signs of the both musical and worldly knowledge of Banhart. Lyrically, Banhart wanders between life-lessons on maturing (Well, the older I get, The less I fear anyone I see, And yet all the more, I fear humanity he sings on Kantori Ongaku), lighthearted political messages (I’m in my Free Tibet shirt that’s made in China, on Taking a Page) and the loss of loved ones (I can still see the room at the hospital, Pretty painted tile, I can still see your skin turning purple, Lily of the Nile). While the influences on this record are miscellaneous, musically the album is quite consistent compared to former efforts. Devendra Banhart has found his peace and, hopefully, he has a long path in front of him in the direction of the top of the mountain.