An Afternoon on Kashmir 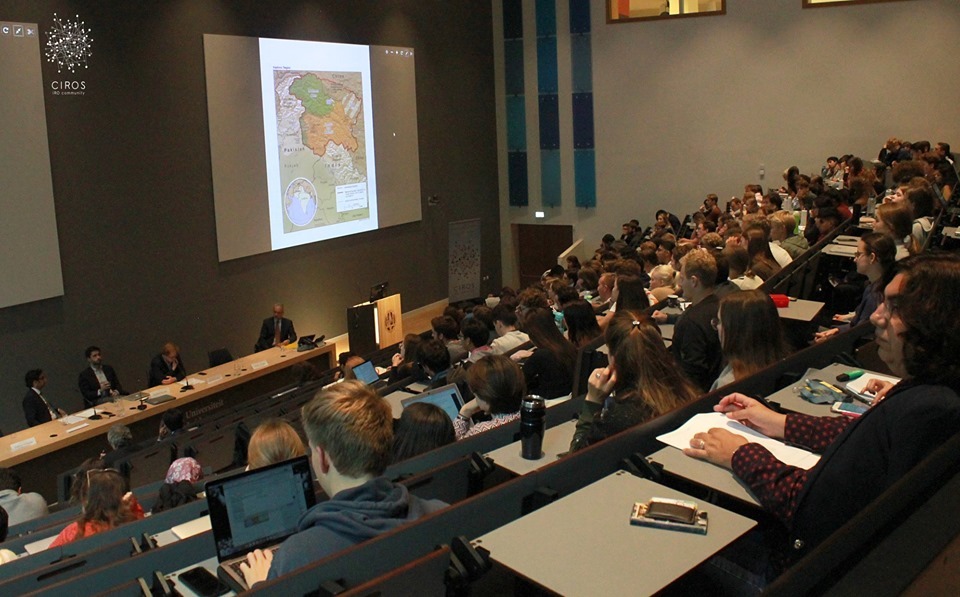 In a crowded room, a mixed bunch of students were eagerly awaiting the panel discussion on Kashmir. The event, highly relevant due to the recent revoking of Article 370 of the Indian constitution, was the first academic event of the year for CIROS.

Indian-administered Jammu-Kashmir, a contested area between India and Pakistan, has had  significant autonomy under article 370 of the Indian constitution, however, this changed in early August of this year. The intention is that the province be split and one section to be under direct control from Delhi. The region is – once again – on severe lockdown. 900,000 Indian soldiers have flooded the area and a curfew is being held in place by force. Thousands of men were picked up and deported during the nights and everything from internet and free press to basic electricity and phone lines have either been blocked or are severely restrained. So much so that many have no knowledge on how the recent earthquake affected their relatives. Getting in contact is a monumental challenge. This problem is made all the more confusing through the historical enmity between India and Pakistan.

Our very own Dr. Nicolas Blarel opened the discussion by an overview of the main issues, and the historical background. He explained how UN resolution in 1998 called for the demilitarisation of Pakistan in the region to be followed by the Indian demilitarisation. None of this ever happened and it actually became a region influenced by 3 – nuclear – players: China, India and Pakistan.

Dr. Simon Chauchard then took the floor to speak on exactly what this means for democracy. He stressed that although the situation in Jammu-Kashmir is not new in itself, it has certainly reached a new level of intensity. Furthermore, he brought the picture of inner-Indian politics into scope. The BJP, which had a score of recent electoral successes, is simply acting on something that the majority of Indians desire: Taking Kashmir under full control. Chauchard raised the question on the implications of this for India’s democracy, where the will of the majority is heeded more than the rights of the minorities.

The third speaker, Dr Tahir Abbas, showed how the issue transcends beyond state boundaries, by bringing the diasporas into the discussion. From the “Howdy Modi” rally in the US, to pro-Pakistani protests in the UK, the issue is framed as an India-Pakistani issue, rather than Kashmiri, and how the voice of the people of Kashmir seems almost irrelevant in comparison.

A highlight of the evening as the attendance of the ambassadors. They joined on opposite ends of the panel out of view of each other. They even had aids in the front row of the audience. This was really when you realised just how severely important the region is. It was when you started to imagine that this is a region with 8 million people and that tensions were running staggeringly highly. They would often make clear gestures as the other spoke: laughing, leaning back with a complete smile showing disbelief, or frantically writing something down as their heads shook from left to right in discontent. In reality the ambassadors repeated the statements that their leaders had rehearsed many times before. Pakistan stressed the importance of a plebiscite for the Kashmiri people often vigorously describing the normalities as genocidal and equal to ethnic cleansing. India continued to define it as an internal matter that is completely within the domain of the national right to act upon as a sovereign state; defining itself as a non-aggressor state.

The Q&A session a very lively affair. There were many very personally attached audience members in the room. Students were able to ask all kinds of questions, on politics, religion and international affairs. The personal impact of the Kashmiri situations was made crystal clear by a student from the region itself. He stood up and explained what it felt like to not be able to contact his relatives – to have no idea how they were living, if they were living or even where they were. “Why must fundamental human rights be violated every time India needs to defend itself? India just gets away with so much shit!”. This student, cheered on by many in the audience, reminded us that this issue is not just an interesting political one, it is reality and impacts the lives of millions of people. For all sides, the stakes are high. It once again highlighted how incredibly polarised and complicated the situation is.

After having the panel, a sense of uncertainty remains. What will the future hold for Kashmir, India and Pakistan? Will the international community once again get involved? What are the consequences for the internal politics of India, which has also become more polarised. What are the implications for the regions around the world that enjoy autonomy, after seeing how yet another country can revoke them without seemingly suffering repercussions? These questions remain for the future to answer.

The evening on Kashmir at least gave the students of Leiden University a unique insight in the situation. Thanks to the efforts of CIROS, we all go to learn a lot more about the region, the conflict and the questions.